To be the man you have to beat the man: Analyzing wrestling engagement in the age of AEW

This month marks the one year anniversary of All Elite Wrestling (AEW) Dynamite, the self-described “show for wrestling fans by wrestling fans” on TNT. By all accounts, the great sports entertainment experiment is suplexing expectations. Dynamite continues to do well in TV ratings, and TNT has already announced its extension through the end of 2023 with a second program in the works. Although at launch, AEW brass was careful to couch the new endeavor as an alternative for pro wrestling fans, they’re now using a different term to describe themselves: revolutionary. And every good revolution needs a monster heel, which in this case is the hulk of the industry: World Wrestling Entertainment (WWE).

In this post, we examine the performances for AEW and WWE over the past year to see how audiences have reacted to the two contenders. To do this, we focused on the main events: AEW Dynamite, WWE Raw and WWE SmackDown.

If you smell what the audience is cooking

There are clearly defined and highly-engaged audiences across all three programs. For both WWE and AEW, the audiences skew largely male, 18-34. Both groups over-index with sports and gaming, which is fitting for this demographic. ESPN, USA and Discovery are favored TV networks, and Peacock’s Saved By the Bell and Disney+’s She-Hulk top the list of content they are looking forward to most.

As noted in our previous post, wrestling was not significantly disrupted by the pandemic, and continued to air fresh content this year. In fact, engagement for the three wrestling shows was higher than engagement for all broadcast primetime shows combined over the last 12 months.

WWE has long been a pillar in ratings and live television. Since its inception in 1993, Raw has aired over 1,400 episodes with generally favorable viewership ratings. But a number of media analysts reported recently that live audiences for WWE’s mainstay aren’t exactly what they used to be. Here at Diesel, we were curious: is it possible that WWE fans are jumping ship for AEW?

Our study revealed that over the past year, 86% of wrestling fans talked about WWE Raw or SmackDown, and 31% talked about AEW Dynamite. It’s clear that the WWE’s social engagement footprint is still much larger than that of AEW. When looking at the overlap across this audience, over half (54%) of AEW TV engagers also talked about WWE TV content, compared to 20% of WWE engagers talking about AEW. This suggests that most AEW engagers have been expanding their consumption of wrestling content to include AEW rather than taking a side and leaving the WWE behind.

However, there are some indications that WWE’s stronghold on the industry might be shifting. Of the people who engaged with both WWE and AEW this past year, roughly one in three stopped engaging with WWE after engaging with AEW. Although that group is not very sizable today, it is an interesting signal considering that AEW was founded one year ago to WWE’s 67 years in the industry. 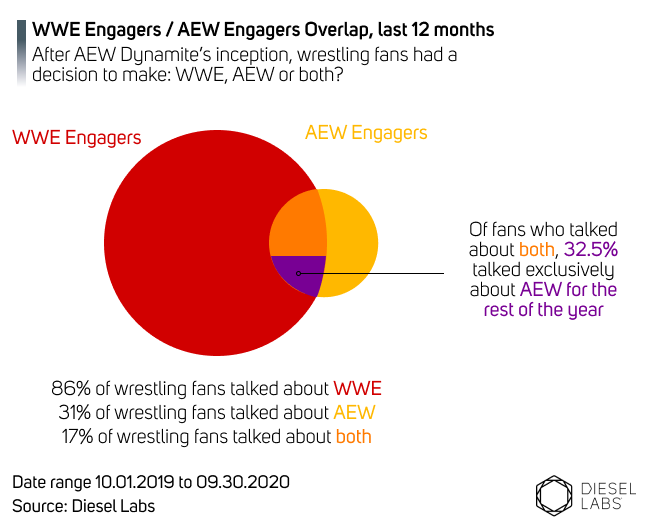 Keeping user engagement in the ring 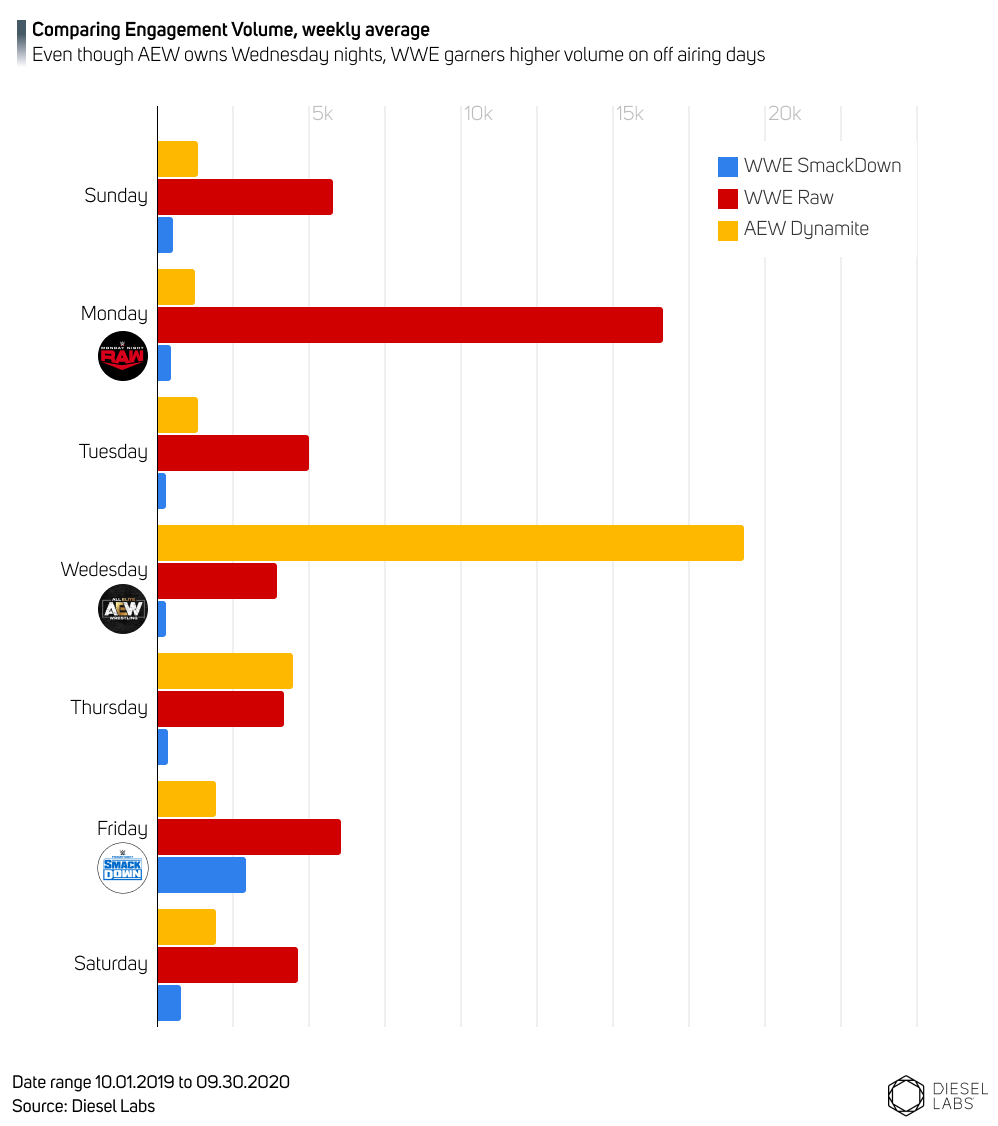 Although the majority of fans are still on the WWE bandwagon, the rate at which these fans engage with their favorite wrestling content tells a different story. Over the course of our analysis, just under half (45%) of all WWE engagers can be classified as superfans for engaging with WWE multiple times, while over half of the AEW audience (54%) fall into the superfan bucket. Among the superfans, WWE’s engage 11.8 times on average, compared to 16.7 times for AEW. Considering WWE airs content three times a week for a total of seven hours and AEW airs once for two hours, the nascent program is clearly motivating its fanbase.

Professional wrestling lovers are notorious for being highly engaged in social media, and AEW fans are no exception. Though all three programs generate the most engagement on days when new content premieres, AEW outperforms Raw and SmackDown on airing days 77% of the time. An interesting finding, though, is that WWE garners sustained conversation on “off days” when flagship programs are not running. In fact, WWE fans talk about Raw at a rate of 2.3x more than Dynamite on days when the program does not air. One interpretation is that AEW fans opt to comment on live wrestling, while WWE fans engage continuously with the “WWE Universe” or the vast amount of TV shows, news, podcasts and content the titan has to offer outside of the traditional airing window.

Nothing is ever certain inside the squared circle, but from this analysis, we can assert the following:

— The wrestling audience is large, active and engaged. This segment also interacts with a lot of other content, such as gaming, other sports and adult animation.

— For wrestling fans, AEW offers an expansion of wrestling content in addition to WWE. Though there are camps taking sides, the general trend is that most people interacting with both franchises engage with them simultaneously. Continuing to present itself as an alternative, rather than a direct competitor (like WCW did in the Monday Night Wars) could be a winning strategy for AEW.

— WWE still reigns supreme, for now at least. WWE has the bulk of the engaged wrestling audience, but AEW has already engaged 20% of the WWE audience. AEW is likely evaluating several growth opportunities, and can follow WWE’s example to encourage more “off air” engagement to keep audiences’ attention. However, with declining ratings across the board, both ventures are going to have to get very creative with where and when they distribute content; for example, by extending live broadcasts to streaming platforms and diversifying into other content areas.

AEW has had a remarkable inaugural season. As Cody Rhodes’ father, legendary wrestler Dusty Rhodes, would say, the stratosphere is reserved for AEW and WWE, and the sky’s the limit!