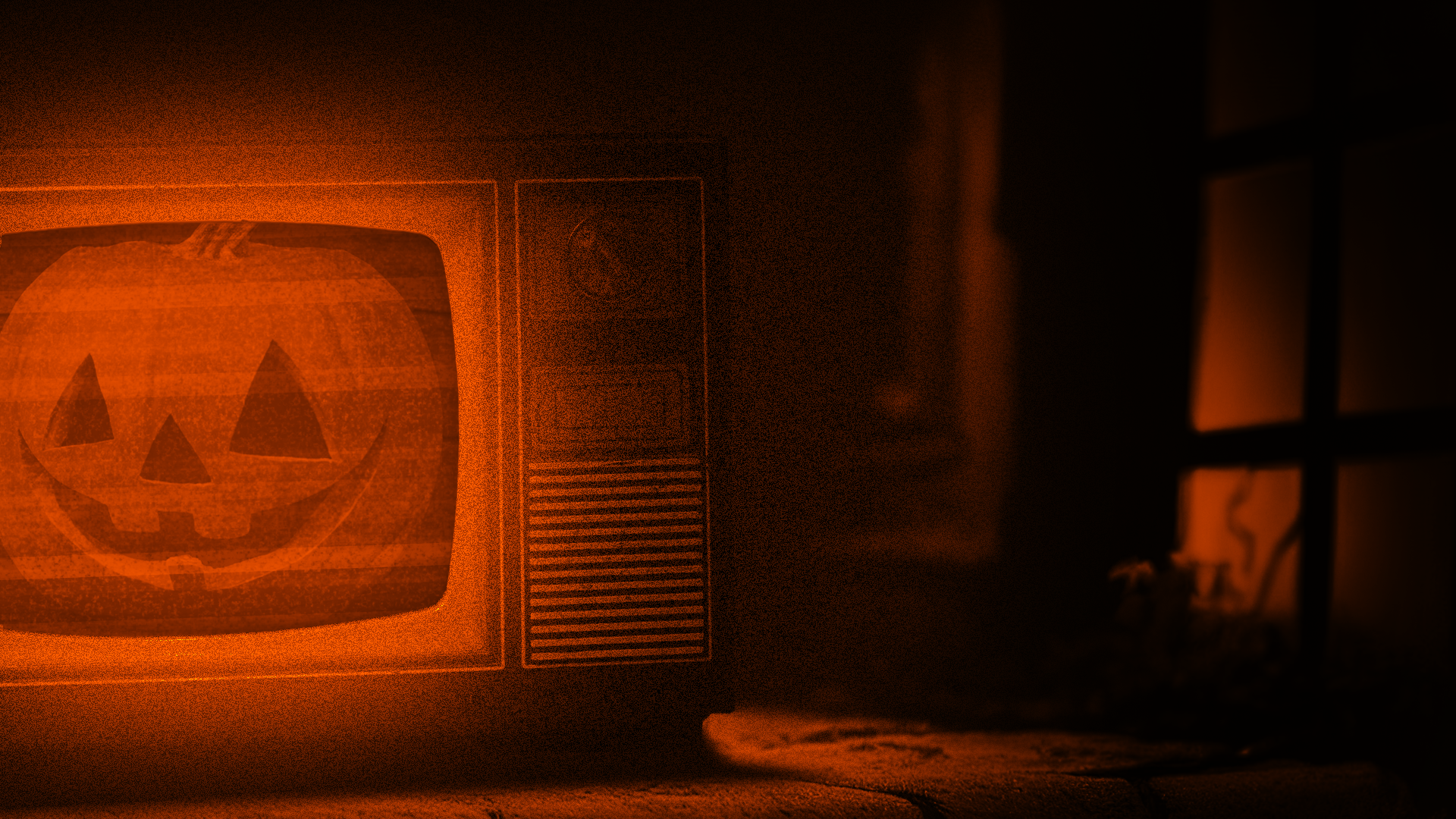 – From mid-Sep through mid-Oct this year, the horror genre captured an average 4.7% share of voice across all entertainment related conversation.

– Across the last six years, the Halloween franchise has dominated audience attention during spooky season across all horror franchises.

– Of the top five horror franchises during Halloween season in the last six years, Nightmare on Elm Street is the only one not to have a new release.

To celebrate spooky season, instead of forcing ourselves to eat candy corn, we examined share of voice trends for the horror genre, and dug into audience attention data to reveal which scary movie franchises have driven consistent attention over the last six years.

No boos about it, conversation around the horror genre gradually increases from mid-Sep through mid-Oct, capturing an average of 4.7% share of voice across all entertainment-related conversation in 2021 and 2022 to date.

The last two years have seen fresh installments in the Halloween franchise, leading to measurable spikes in the overall SOV for horror. In 2021, Halloween Kills released in theaters and on Peacock driving a huge spike in horror SOV. In fact, the movie itself boasted a not-so-scary 12% share of voice across all TV and films on release day (Oct 15, 2021). Halloween Ends drove a similar SOV spike this year with a 7.2% SOV on premiere day (Oct 14, 2022). 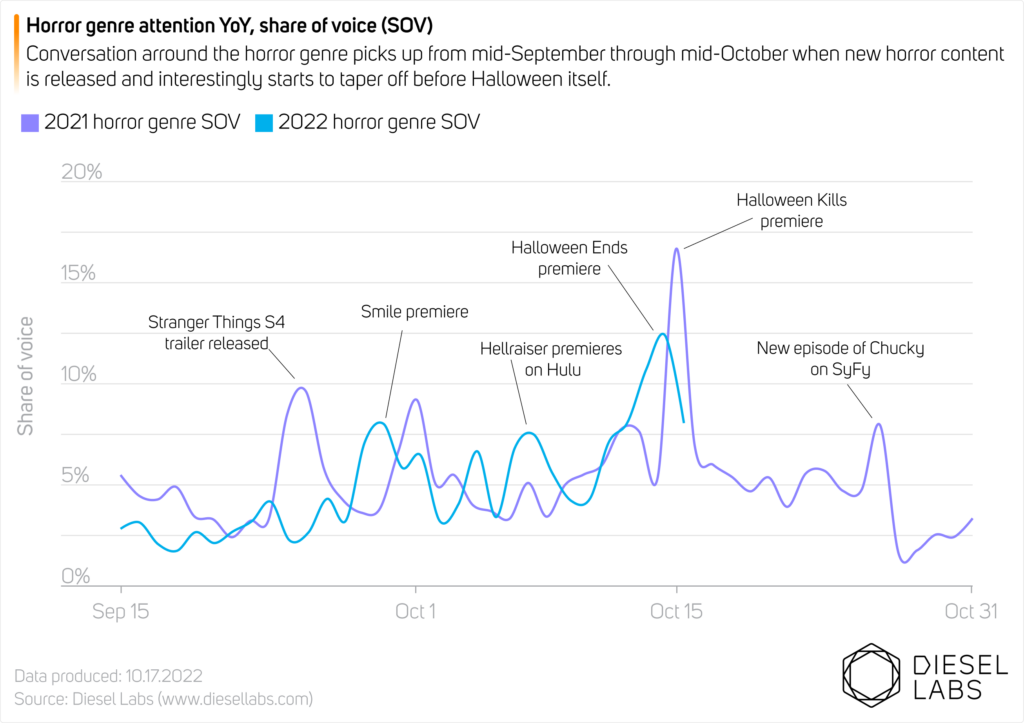 Horror-adjacent but seasonally relevant Hocus Pocus 2 captured a devilish 14.8% SOV across the entire entertainment landscape on release day (Sep 30, 2022) — even higher than the Halloween installments on their respective premieres.

Note the drop off in attention after the midway point of the Halloween season, suggesting audiences interest in filmatic fright peaks over two weeks prior to the holiday itself. This might be due to the fact that typically horror content releases before Oct 31st to provide for more time in theaters.

‘Halloween’ has a lock on horror

Notably, the Nightmare franchise is the only one of the five not to have a new release during this time period, but impressively remains a fan favorite this time of year. 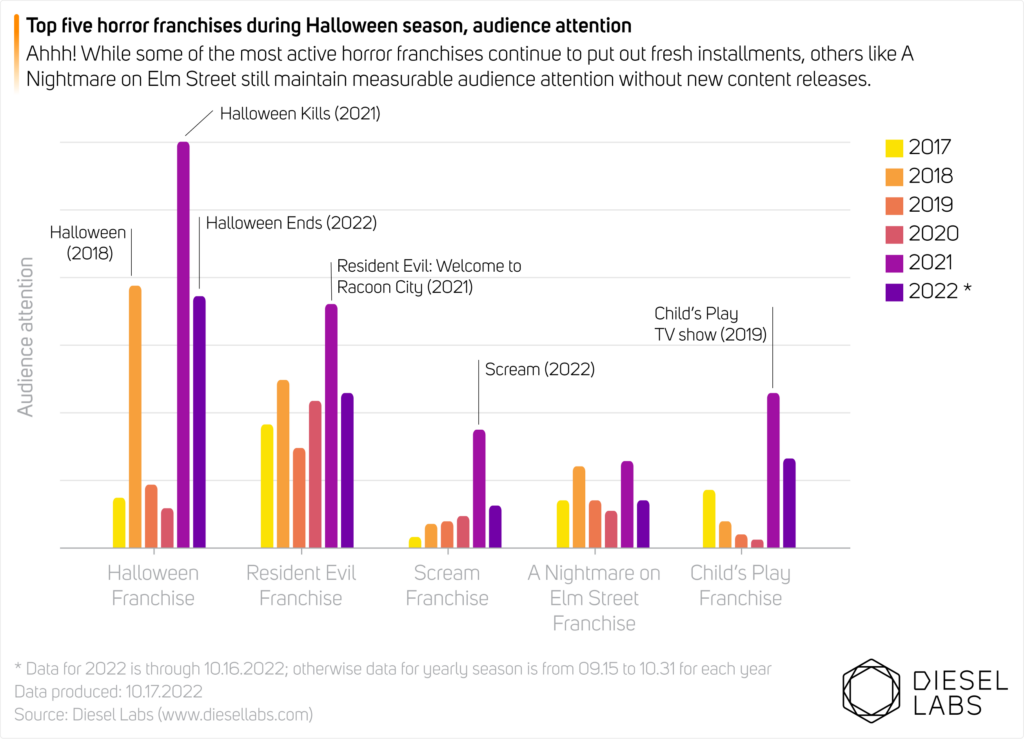