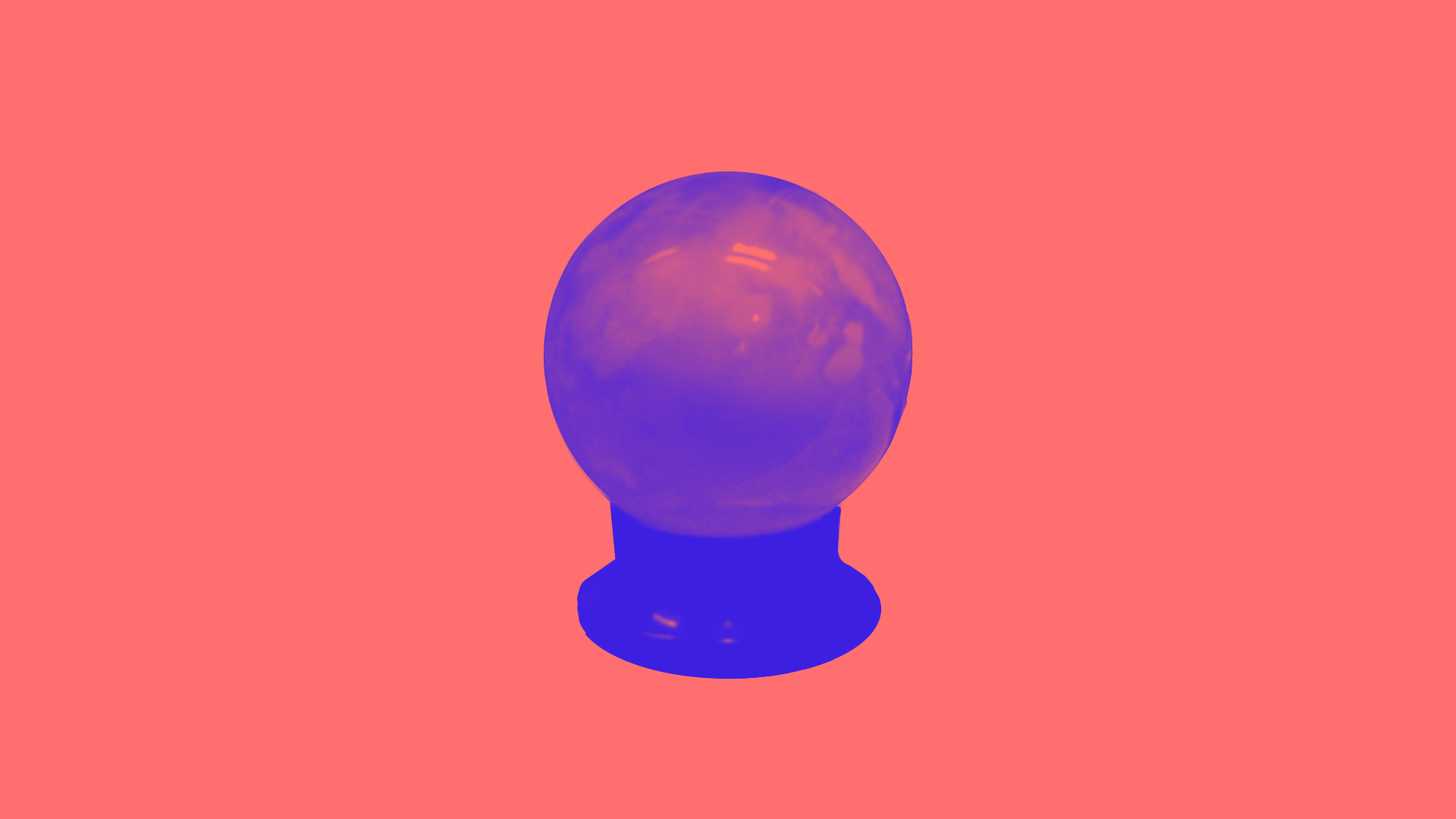 Even with all the changes that have taken place this year, at least one thing has remained constant: getting excited about TV and movies. We eagerly welcomed back Baby Yoda with last month’s premiere of The Mandalorian and continue to wait patiently for No Time to Die. Our collective excitement leading up to premieres like these generally culminates with an even bigger flurry of emotion when the content is released, so focusing on engagement ahead of a launch can be an early indicator of success for content developers. Platforms like Netflix place a lot of emphasis on performance in the preliminary weeks surrounding a launch and determine the fate of new shows within that short window. For example, they announced a second season for Emily in Paris shortly after it premiered, while Away literally went away.

Knowing that platforms take on new content investments by looking at the potential return, we were curious if analyzing anticipatory engagement could be a viable indicator of success — or a red flag for potential marketing course correction. We also wondered how different platforms handle anticipation in their content strategies. In this post, we take a look at both angles to see if leveraging anticipation could de-risk investments. 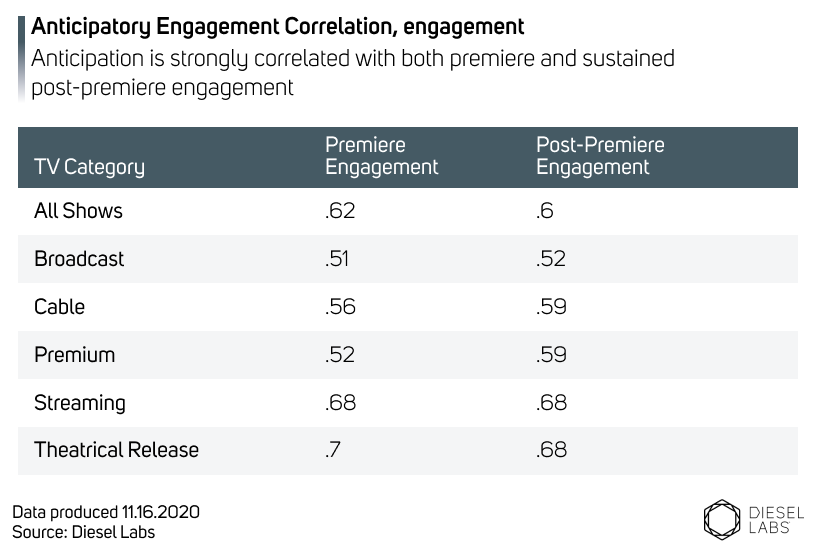 To examine the potential relationship between anticipation and launch engagement, we looked at the two months leading up to and following 2,000 recent show premieres, spanning both linear and streaming platforms, as well as over 250 theatrical releases.

We saw that across shows and movies, anticipatory engagements were strongly correlated with premiere day engagement (.62 and .7, respectively). What’s even more interesting is that there are similarly high correlations between anticipatory engagement and sustained post-premiere engagement (.6 and .68), suggesting that building anticipation not only pays off on premiere day, but also signals the potential for sustained engagement afterward. This is something for networks to keep in mind: Shows that have sustained engagement before, during and after airing are those that provide the best returns by generating larger volumes of impressions and cementing themselves in the minds of audiences. 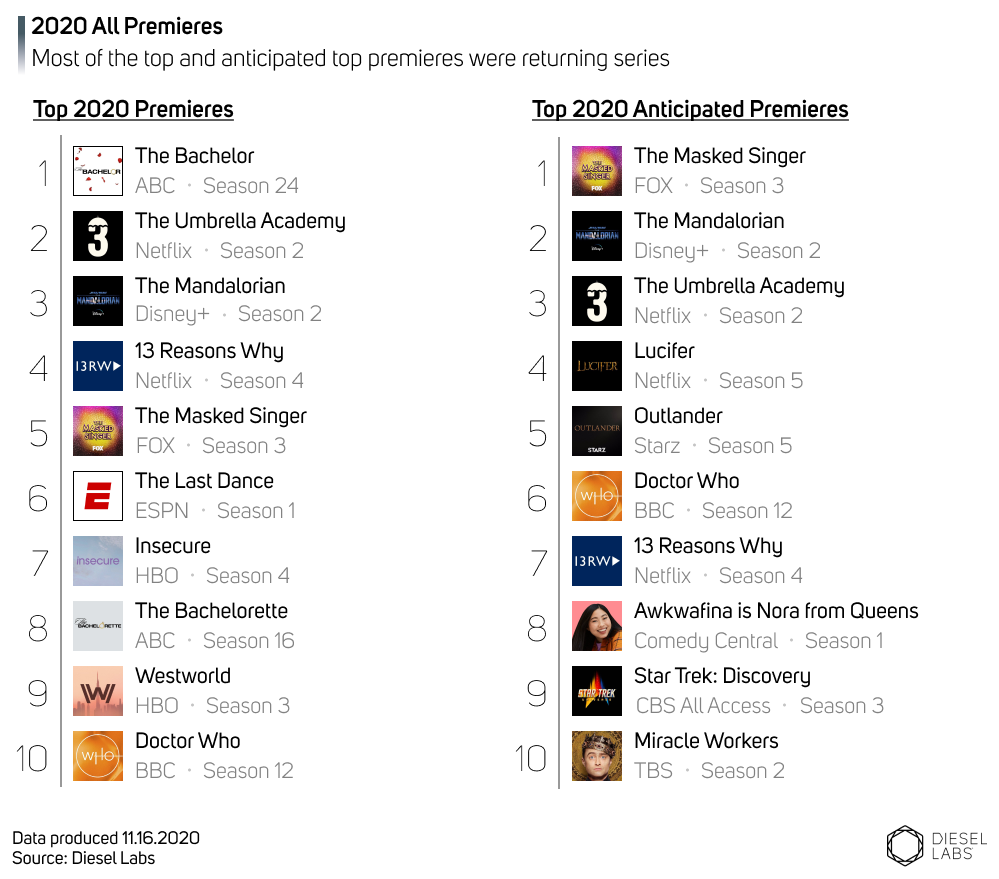 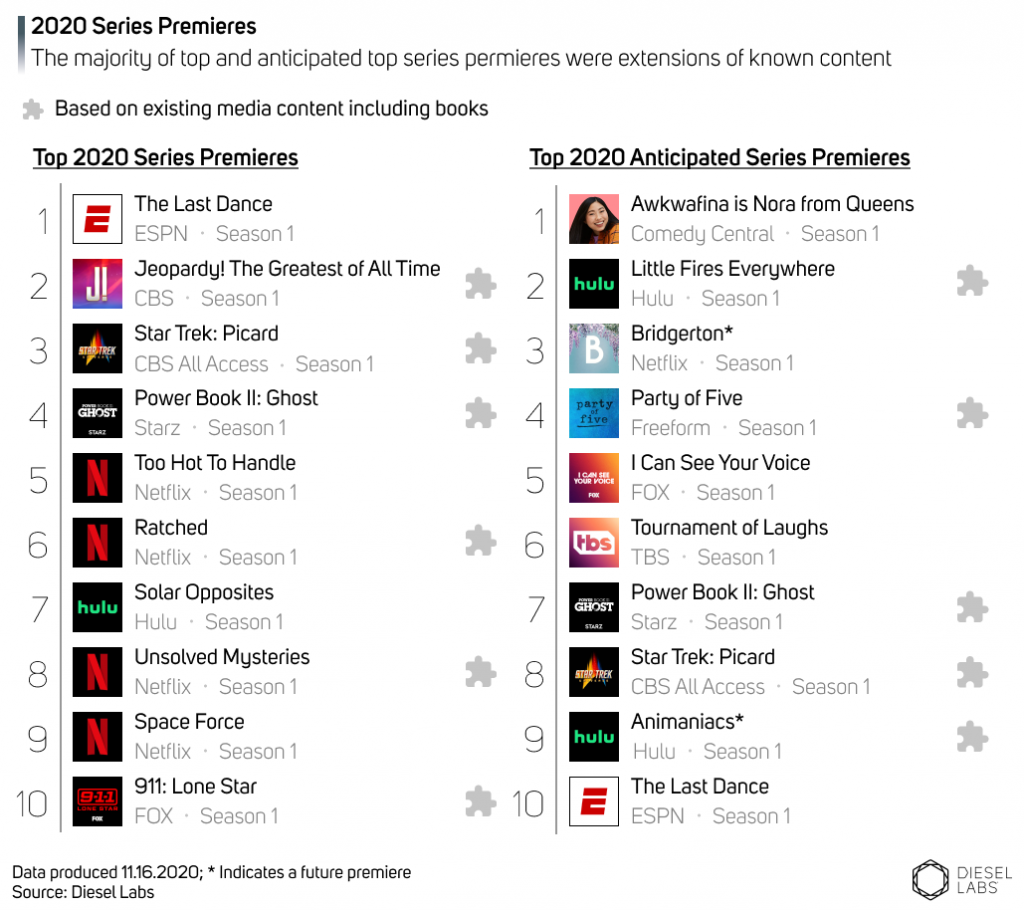 Looking at the shows that generated the most anticipatory engagement so far this year:

For shows that generated the most engagement at launch so far this year:

This highlights some interesting content production behaviors, in that extensions of already known content seem to be a less risky bet and are more likely to perform at expected levels. Top performers outside this cohort generally feature higher profile talent in front of or behind the camera, such as Awkwafina (Nora from Queens), Shonda Rhimes (Bridgerton) and Michael Jordan (The Last Dance).

To benchmark performance, we looked at the ratio between the anticipation, launch and post-launch periods. We found that for new shows, launch day engagement is usually 1.75x higher than the sum of all anticipation, and post-launch engagement is usually 15.4x higher. Knowing this, we wanted to see which shows outperformed these benchmarks to identify the ones that seemed to come from nowhere and yet still managed to capture attention. Scanning every show in our system from the past three years, there were forty breakout titles, like Netflix’s The Queen’s Gambit, HBO’s Euphoria and FXX’s Pose. Of the breakouts, seventeen were from streaming platforms, and thirteen of those, or more impressively 33% of all the over-performing shows, were Netflix offerings. Although this might seem to imply Netflix shows are a sure thing, it’s worth noting that over 62% of all Netflix content underperformed post launch.

Analyzing content portfolios for upcoming releases reveals that companies have distinct content development strategies. For example, at the time of writing, Netflix has 13.6% of the yet-to-premiere original titles with a 13.8% share of anticipatory engagement. Contrast that with Disney+, which has 5.8% of upcoming titles but a massive 38.2% share of engagement. This illustrates that Disney takes advantage of their well-known franchises while Netflix attacks with a much broader portfolio of lesser-known original stories.

— There is a strong correlation between anticipation for content and the resulting launch and post-launch engagement levels, which supports the need for solid marketing leading up to and through launch, especially for key titles.

— There is no one size fits all content portfolio strategy. It’s clear that there are multiple approaches that are proving successful, like Disney with franchise expansion and Netflix with high volumes of original stories, and there’s likely room for new strategies we haven’t seen yet.

— Ultimately it’s the levels of audience engagement that create a clear delineation between good shows and the great ones that become culturally iconic, from which continuations, spinoffs and reboots can emerge.