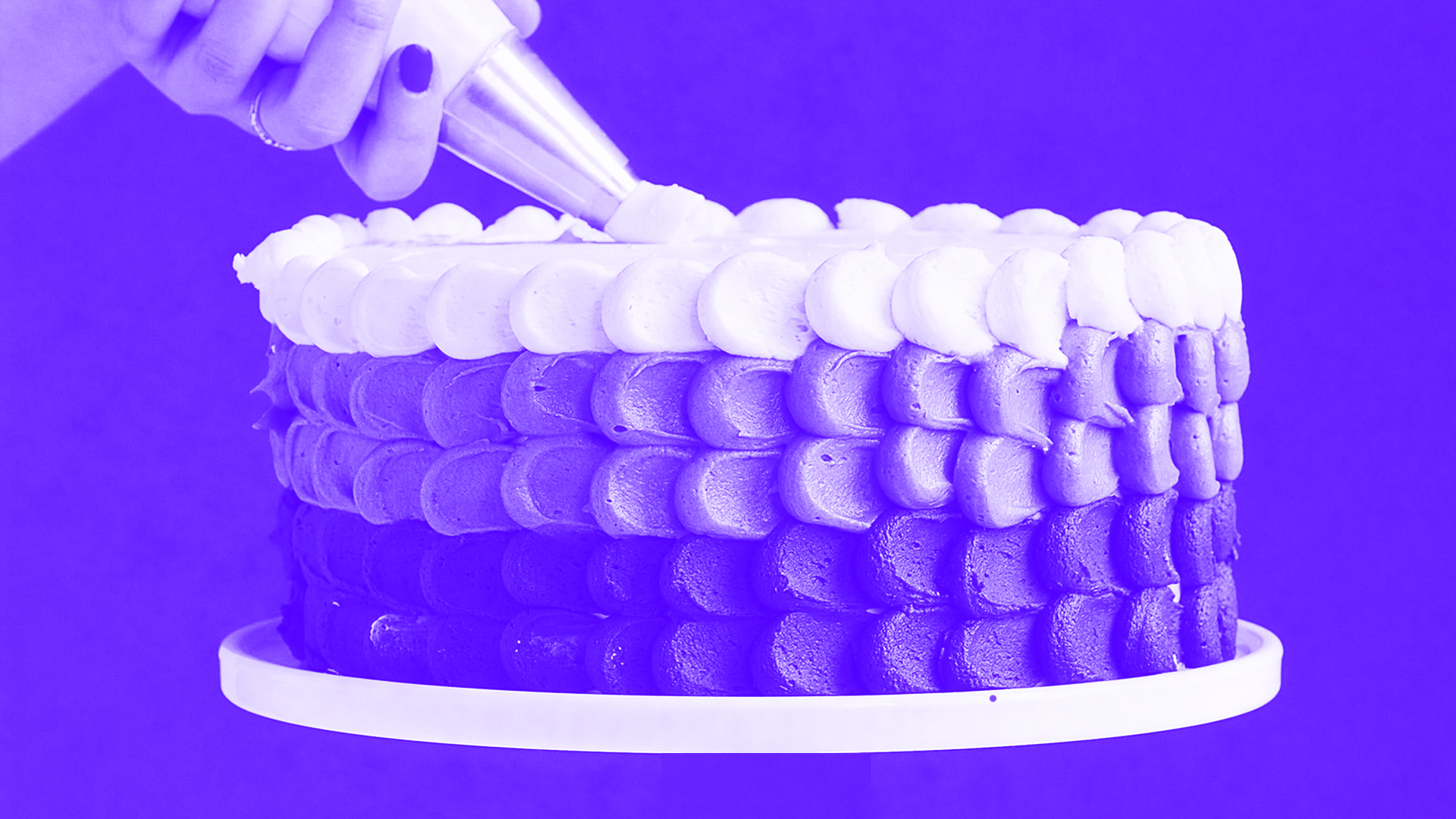 Cooking up some Content Analytics for popular competition shows

The popularity of competition cooking shows has skyrocketed in recent years, with Chopped, MasterChef and myriad others gracing TV screens and delighting fans. And now, thanks to its availability on Netflix, the U.K.’s popular The Great British Baking Show has gained traction in the U.S. as well.

We dove into the Content Analytics around these three series to reveal audience behaviors and trends, including what networks and streaming services they use, lifestyles and brand affinities. Unlike what you may expect, these audiences are not all food-focused, all the time, as you’ll see from the lifestyle and brand category analytics below. A few key insights that we uncovered:

— The Great British Baking Show is the only show of the three that over-indexes for streaming.

— The Chopped audience is the highest-indexing audience for linear TV (+22%), but notably the lowest-indexing networks are Spanish-language Telemundo (-72%) and Univision (-51%).

— The audiences for both Chopped and GBBS have a high affinity for coffee.

— Food Network is in the top three networks for each of the shows.

Of the three series we examine here, The Great British Baking Show audience is the only one that over-indexes for streaming (+71%), while under-indexing for all broadcast networks — and not only that, the top lifestyle for this audience is cord cutters. This makes a certain amount of sense, since it doesn’t run on linear television. Looking at cable networks, unsurprisingly, Food Network, BBCA and HGTV top the list while BET and VH1 trail.

GBBS also has both the most movie-engaged (+10%) and the most celebrity-engaged (+52%) audienced of the three series. Interestingly, the top brand categories are podcasts, fitness and gaming, while candy/gum is the lowest indexing brand category — a sharp contrast with what we found for MasterChef below.

Chopped has long been a mainstay for Food Network, with an incredible 44 seasons and multiple spin-offs (here, we’re just talking about the original series). It has the strongest tie to linear TV of the three series, with an over-index of +22%. The top cable networks are Bravo and Food Network, but the bottom two are Spanish-language Telemundo and Univision.

The Chopped audience is the most music-engaged (+16%) and most brand-engaged (+67%) of the shows. Top lifestyles include plant-based foodies and coffee enthusiasts, and top brand categories are airlines and travel. Entertainment brands (Disney+, Roku, etc) are the lowest-indexing brand category.

The MasterChef audience over-indexes (+13%) to linear TV, and in particular indexes strongly into broadcast with a range of 21% to 73%, excluding The CW — which makes sense, because it airs on Fox. Looking at the top cable networks, Food Network and A&E lead, while premium cable channels HBO and Starz are at the bottom.

The top lifestyle is bargain shoppers, while the top brand category is CPG, particularly candy/gum brands (the reverse that we saw for GBBS), over-indexing by 61%. Entertainment (-28%) and gaming (-15%) are the lowest-indexing brand categories. 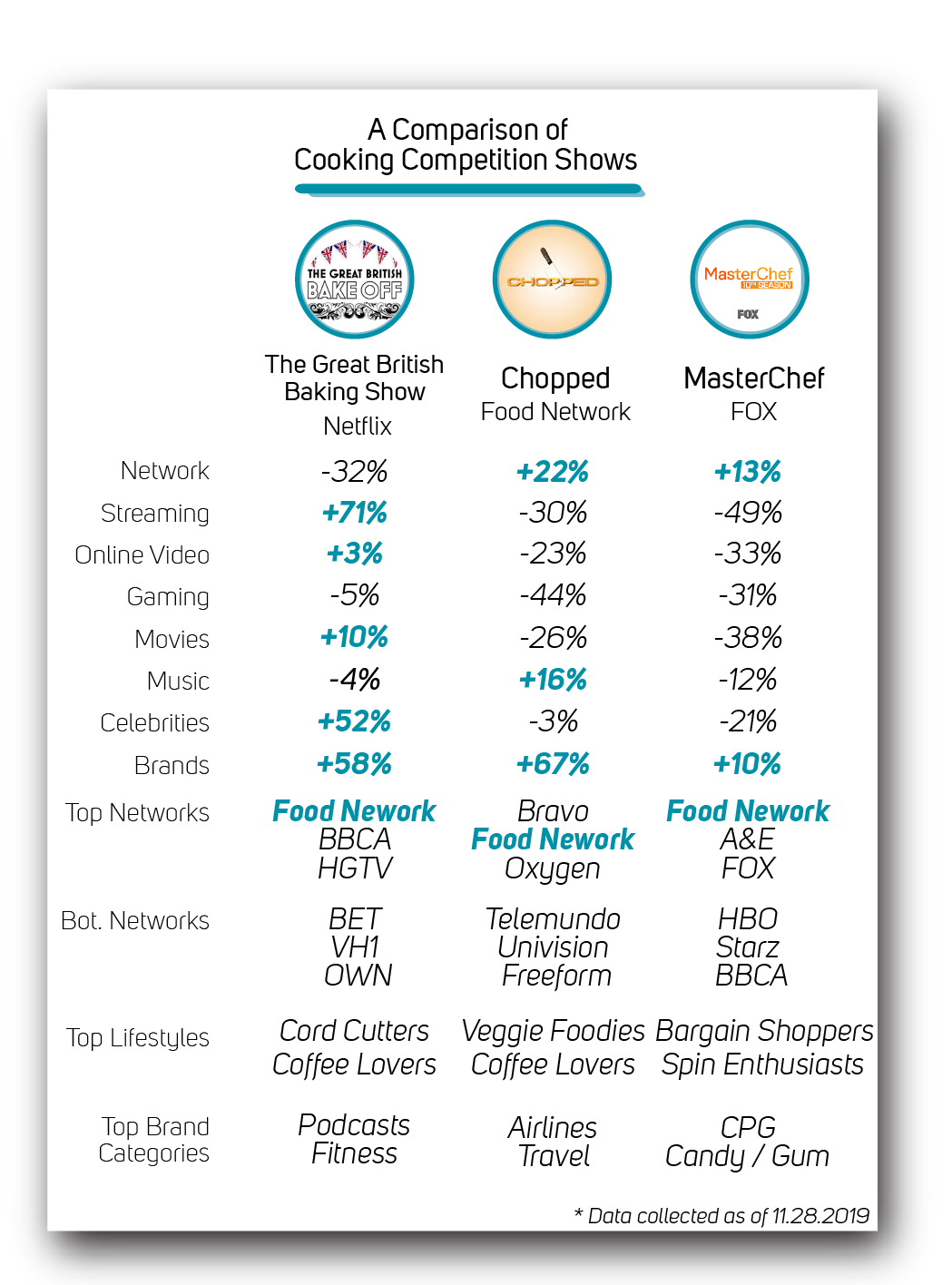 *The percents above reflect the named show vs. the overall average for all shows measured by Diesel Labs