As the coronavirus pandemic sweeps across the globe, more Americans are sheltering at home — and turning to TV and other entertainment forms to find comfort and stave off boredom. We used our Content Analytics platform to uncover insights around recent audience trends for TV shows, movies, the newly-released Quibi and COVID-19 special television events. We’re also excited to announce the web release of watchNXT, a recommendation engine to help you decide what to watch next — more on that below.

As shelter-in-place orders began to be issued in March, it’s no surprise to see an increase in engagement around TV shows (+30% compared to March 2019) and gaming (143% compared to February 2020). And notably, there was a -73% decrease year-over-year around movies, which makes sense as studios delayed releases amidst wide-spread theater closings. 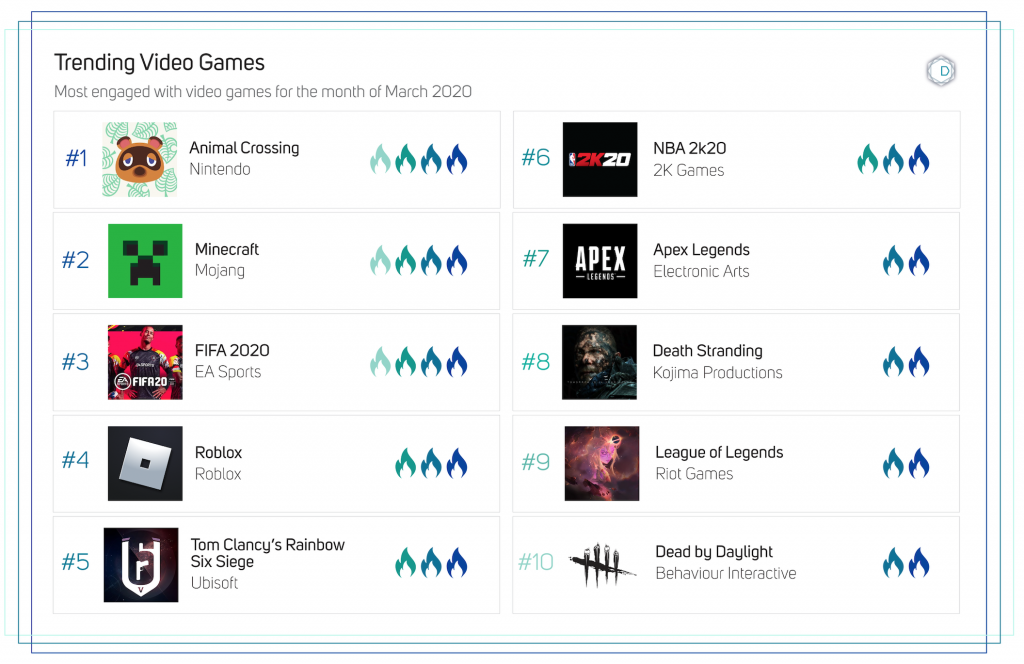 With theaters closing across the country, many movie releases have been pushed back — and some studios are even releasing them via streaming instead of in theaters. When it comes to movies that are generating engagement, Midsommar, Uncut Gems, No Time To Die, Mulan and Bird Box were ranked highest. 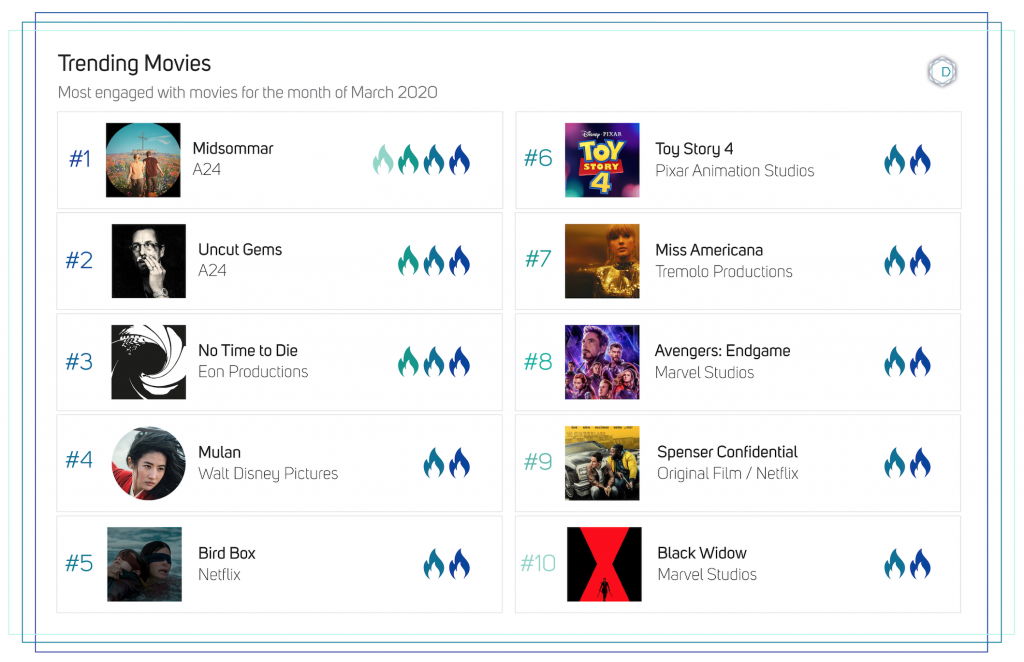 Ever wondered what you should watch next, or felt “tile fatigue” – when you’re scrolling through endless options within your favorite streaming platform and just can’t settle on something to watch? We are powering watchNXT to help — a new recommendation engine that helps viewers figure out what to watch across streaming services, YouTube and traditional TV.

watchNXT gives personalized suggestions based on shows and movies a viewer has enjoyed: simply enter the name of a movie or TV show and watchNXT serves up a deep variety of content options across Amazon Prime, Apple TV+, Disney+, Hulu, Netflix, traditional television and YouTube that were enjoyed by the audience of the show/movie you entered. The service is free and available to anyone, and works across mobile and desktop browsers. Try it out at www.watchnxt.com or via a Chrome browser extension.

The long-awaited Quibi launched in early April, just in time for the coronavirus pandemic to upend the service’s initial sell as quick entertainment bites while you’re on the go or waiting for something in public. Quibi is offering a free 90-day trial for users and racked up 1.7 million downloads in its first week. Our Content Analytics reveal some trends around the Quibi audience when it comes to other platforms and networks:

For the overall Quibi-engaged audience, 31% have engaged with a Netflix original, 30% with an ABC original, 24% with an HBO original, 18% with an NBC original and 17% with a Disney+ original.

For the Chrissy’s Court audience, 89% have chatted about a Netflix original, 61% about an ABC original, 37% about a CW original and 26% about an HBO original.

For the Iron Sharpens Iron audience, 40% have chatted about a Showtime original, 36% about an MTV original, 34% about a Netflix original, 28% about an Amazon Prime Video original and 26% about a BBC America original.

The coronavirus has halted live sports and cancelled many special events, so TV networks are finding new ways to produce fresh content and engage viewers. We looked at the Content Analytics around three special events: the NBA HORSE Challenge, which began on April 12, The Disney Family Singalong on April 16 and One World: Together at Home on April 18.

As you may expect, the audience that engaged with the NBA HORSE Challenge skewed male (61%), with 26% under the age of 24. Its audience under-indexed by -39% with TV shows, but over-indexed by 21% with YouTube and a whopping 107% with gaming. Top brand categories for the audience include restaurants, telecom and candy/gum. When it comes to favored content, sports, specials and documentaries lead.

The Disney Family Singalong-engaged audience was 62% female with nearly half (43%) under 24 years old. The audience over-indexes by 40% with TV shows and 22% with YouTube. Beauty, entertainment and baby/kids are popular brand categories, which makes sense given the family-focus of the event. Top content genres include specials, reality competitions and sitcoms. 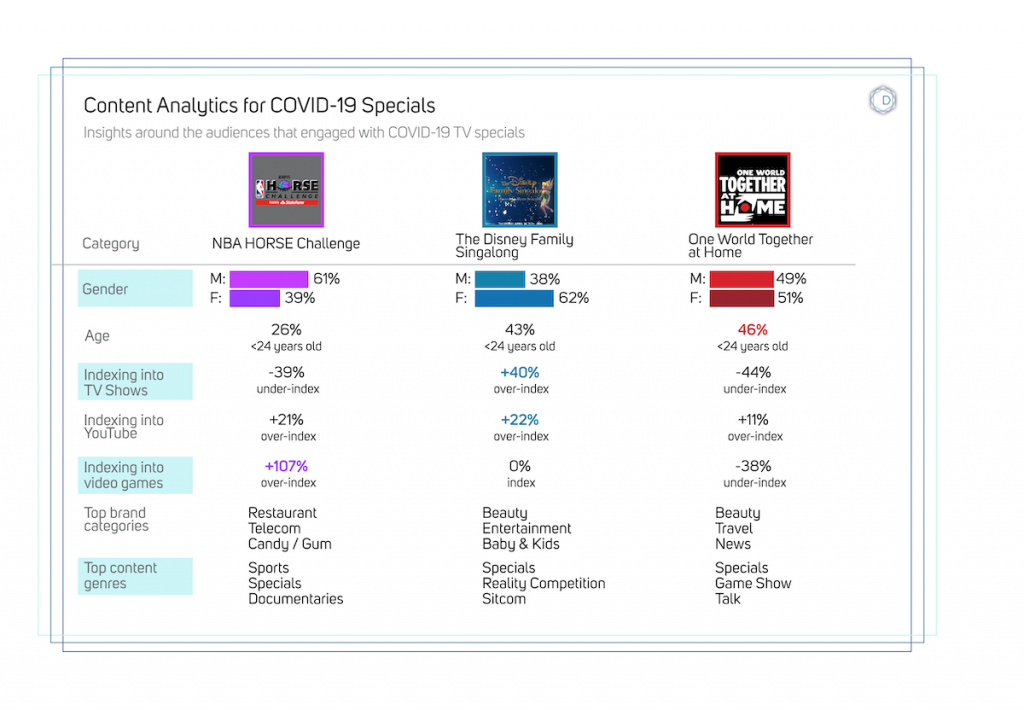